Archive for the tag “the lion’s song”

At the turn of the 20th Century, a young aspiring painter named Franz struggles to make a name for himself.  He has the ability to see the different layers of people, yet has trouble bringing them to life in his paintings.  Can Franz discover that one element he needs to bring his paintings to life?

Once again, we have another story about the struggles of an artist.  Like Wilma, Franz is struggling to find himself and develop his work.  However, while Wilma had to isolate herself in a cabin to develop her next song, Franz needs to go out and explore the real world to be able to bring life to his paintings.  On his journey, he takes advice from an art critic, Grete, and has a session with real life historical psychiatrist Dr. Sigmund Freud. I don’t want to give anything away but, at the end, there’s one painting you help Franz with.  Whether he completes it is up to the choices you make.

Like the last episode, you get to see references to early 20th Century Germany and, as mentioned earlier, Sigmund Freud makes an appearance.  You get to see history in the making from the fashions to the farmer’s market.

Slight spoiler alert, Franz not only knows Wilma but actually painted her.  If that’s not enough, you get to hear Wilma’s song on the gramophone. 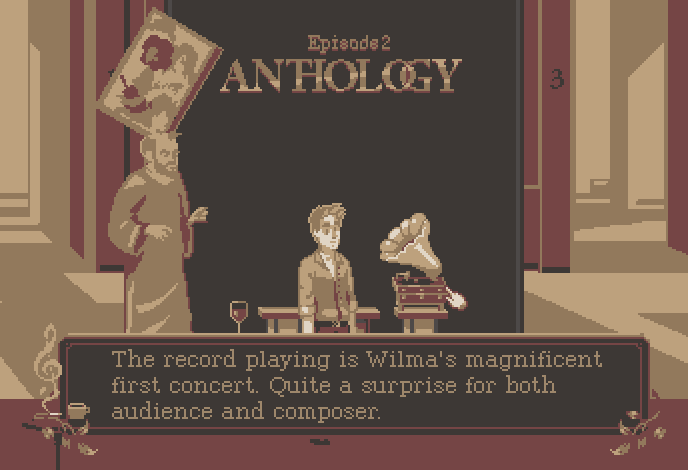 For those of you who explored everything the cabin had to offer, the Grete in this episode is also the same one who sent a love letter to Arthur.  You also see another hint for what will take place in Episode 3 when Franz has the opportunity to paint a Mathematician.

The game play is similar to the last episode, with you making dialogue choices for Franz. 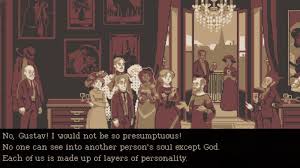 As I said in the second paragraph, you get to explore more in this episode than you did in the last one.  In the first episode, you had little to no control over where Wilma went next. She stayed in a cabin, listening to the sounds around her for musical inspiration and only left in dreams.  With Franz, you could explore the city and actually talk to people to learn how they view the world. You also get to see how Franz views people by the white silhouettes representing the layers of each person’s personality.  You even get chances to paint people and ask them questions. What you ask determines how the painting will turn out.

This game is insightful and intriguing.  I give it 9 out of 10, it somewhat made me think and managed to get a chuckle out of me at certain points.

Wilma’s a promising young musician in early 1900s Austria who’s having trouble coming up with a new composition.  Her professor offers to let her stay in his cabin for the week, hoping Wilma can find inspiration. Will she be able to write her next piece in time for the weekend concert?

As you can see, this game is historical fiction and it has a retro design to drive that point home.  This chapter is about Wilma and her struggles with her own insecurities. This shows itself in symbolic dreams, her crush on her professor and her conversations with Leos over the telephone.  I’ll admit that Arthur is a bit of a selfish jerk, trying to force Wilma to come up with a composition so he doesn’t lose face. However, Wilma’s crush on him is realistic as he is an accomplished professor.  Leos is a man who calls a random number to test out his new telephone and ends up talking to Wilma about his problems while helping her in return.

The dreams are also very symbolic of the pressure Arthur put Wilma under and her very own insecurities.  Wilma even finds herself weird for caring more about her musical career than she does about starting a family, something she briefly talks about with Leos. In other stories, I’d consider this sexist but, in this game, I actually thought it was a clever nod to the role of women in that time.  Another aspect of the time is how remarkable Leos thinks the telephone and its ability to communicate with people from different parts of the world are. People of our time have the same reaction when we try out virtual reality for the first time at Best Buy.

The game play is simple point and click with you also picking Wilma’s dialogue options. You choose what Wilma will say to people and you click various objects to help her find inspiration.  Many players might find this confusing, but keep in mind that Wilma is a musician. She can hear music from the drops of the rain to the swinging of the lantern.  Wilma also gets ideas from reading books and letters that help her decide how to write her composition. Not only is it your job to click on the various items. You also have to find them in the right order.  Whether the audience thinks Wilma’s song is a masterpiece or run of the mill classical depends on you. This game is insightful and intriguing.  I give it 8 out of 10, a compelling psychological study on how musicians create.