Archive for the tag “technology”

You’ve found a phone that once belonged to a teenage boy named Sam.  What kind of person was he and how did he lose his phone?  Go through his phone to find out.

In real life, if you find someone’s phone on the ground, don’t go through it.  Even if you did, you wouldn’t be able to crack the password.  Anyway, you might read the summary and think this must be a boring game.  First, I should say that you couldn’t be more wrong.  Second, I should also say that I found this game on Gamehouse and it’s a little more controversial than what they usually publish.  Spoiler alert, Sam is a bisexual transgender who lives in a conservative town.  She has issues with who she is due to close-minded people surrounding her, including her own parents.  The story is about the relationships Sam has with her friends while trying to discover who she is.  It’s similar to Gone Home about a teenage girl’s struggles with her homosexuality.  Considering that the closest Gamehouse Original Stories has to an LGBT character is Francois, who has yet to come out of the plot closet, this is quite a shock.  They also deal in stories that are more family friendly.  I’m not saying that the LGBT shouldn’t have representation in children’s entertainment, quite the opposite.  It’s just that the game also deals with misogyny when they not so subtly hint to a rape attempt.  The guy blames the girl for leading him on and then shunning him.  What actually happened was that the girl wore a provocative dress, her boyfriend got a little drunk and he forced her to press against him when they danced.  She told him no and he got mad.  To make a bad situation worse, when she went home to her father and said that a stranger molested her, he told her that, the way she’s dressed, she asked for it.  I remember in Elementary School that they had one motivational poster about how you are responsible for you.  Ironically, society itself often contradicts this message.  This is similar to how bullies say that, if their victims didn’t want people to beat them up, they shouldn’t act different from everyone else.  It’s something that Frasier and The Big Bang Theory agree with.  In the former, Martin tells Frasier and Niles about when they were children and into the British television series The Avengers to the point of wearing bowler hats.  Then says that it’s something they shouldn’t have done because they made themselves a target.  In the latter, Penny once claimed that she felt guilty for picking on the geeks in high school and then claims that, if one of the kids didn’t want to get beat up, they shouldn’t have shown up to school wearing a bow tie.  While rape and getting beat up might not be on the same level, the point still stands.  Frasier and Niles should be able to wear bowler hats if they want to.  A boy should be able to go to high school wearing a bow tie without getting beat up.  If a girl wants to wear a provocative dress because she looks good in it, she should be able to without having to worry about rape or molestation.  This serves to point out how screwed up Sam’s town is and how liberal she is in comparison by telling the girl that it’s not her fault.  That’s not the only discrimination you can find in this game.  For instance, someone sets fire to an LGBT center and people around Sam, even his own parents, say that it’s a good thing.  I’m not sure if I mentioned this in a former review, but I have Aspergers, which is a low-level form of Autism.  I was lucky enough to have an understanding mother, but stories such as Silent Voice taught me about the discrimination people like me face.  One thing I learned is that parents do murder their autistic children and many people feel sympathy for the parents.  The news reporters even treat it as a mercy death rather than talk about how the children could grow up to accomplish so many things.  Therefore, I can somewhat relate to what Sam’s going through in my own struggles to accept my Aspergers.  However, as someone pointed out in his or her own review, the gameplay does undermine the message.

As I said in the first paragraph, you find Sam’s phone and violate her privacy.  It goes much further than that as you scan her text messages and emails to discover her passwords. 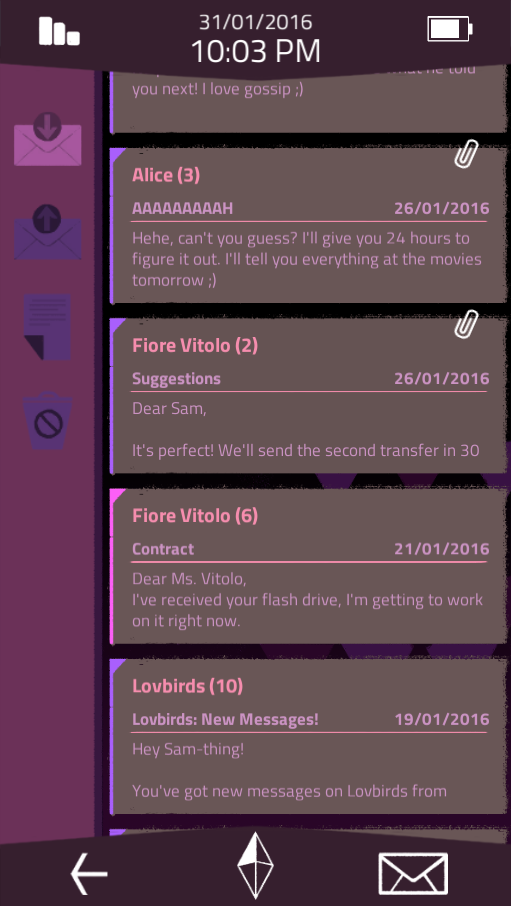 You even send emails and pictures to other people pretending to be her.  While the detective work makes for intriguing game play, you not only violate Sam’s privacy, but also her rights.  I can only think of three people who would do something like this, House, Sherlock and Dean Winchester.  All of them would do this to solve a case, though the former two might also do this because they’re a**holes.  Apparently, the designer of the game didn’t think that part through.  You could’ve easily had this be about a detective solving a murder investigation, or an amnesiac Sam going through his phone to discover who he is.  Instead, the only clue I have about what kind of person you play is that they’re a d*ck without any regard for personal space.  Just the kind of person I would hate to run into.  At least, in Gone Home, you play the role of a young woman coming back from college to an empty home trying to figure out where everyone went.  Even she refused to dig too deep by refusing to read her sister’s diary about her first sexual encounter.

This game is addictive and intriguing.  I give it 8 out of 10; the game play undermines the story’s message.

Mystery Tales: The Other Side Beta Test

The Twola TV Company’s giving away free super TVs all over town.  Only issue is that the police keep getting reports about dead bodies in front of these television sets.  Is it a coincidence, or are these TVs deadly for viewing?

I’m sure you already figured out on your own that there’s something suspicious about these TVs.  The actual mystery is about what is up with these TVs.  In the first few minutes, you know something’s wrong when your partner, Natalie, passes out in front of hers.  That’s right; it’s the damsel in distress cliché.  The use of this is particularly grating when you discover that Natalie collaborated with you on several other previous cases, all of them involving the supernatural.  Wouldn’t she know better than to fall into such an obvious trap?  If that wasn’t enough, one of the characters is a scientist with anti-television views people haven’t had since the 1950s.  Needless to say, this incident actually makes his argument stronger.  Despite these plot issues, the mystery is intriguing and I really would love to solve it.

The game play is typical hidden object with you going from room to room collecting various items to use in different locations.  Some items require you to participate in hidden object scenes.  If you’re having trouble finding items, use a hint.  Let me tell you, I’ve only had to use the hint a couple of times throughout the beta test.  You can also play mini games that are easy to follow but, if not, you can skip it.  I’ve only had to skip one game, which is a good sign.  During the run, you collect notes and diary pages with only the former available for viewing.  You can read the latter when the full game comes out.

This game is addictive and intriguing.  I can see myself buying the full version in the future.

Sarah just received her nursing credentials.  Unfortunately, no one wants to hire a new applicant.  That is, until a failing hospital wants her help bringing patients to them.

There’s not much of a plot but the game play makes up for it.  You take patients to the registry and then take them to the station they request.  If you don’t have what they need, then use the ambulance to get rid of them.

Between levels, you can purchase new stations, decorations and spend more on coffee, salaries and various other things to keep the hospital in perfect shape.

You can’t advance through the game without obtaining the minimum goal but try for expert if you feel lucky.