Archive for the tag “match 3” 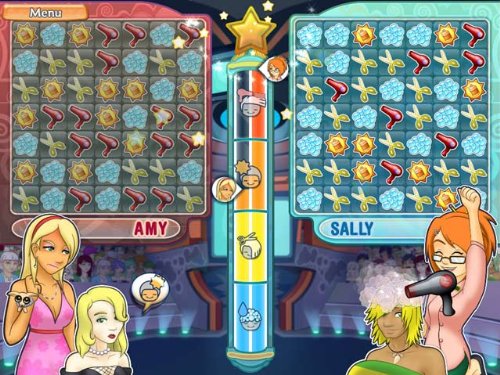 Have you ever wanted an aquarium but didn’t want the responsibilities attached to it? Now you can with your own virtual fish aquarium. Design the tank to keep your virtual fish happy.

That’s right, this game has no story whatsoever. You just purchase equipment, fish and decorations for your three tanks. You can get the money by playing a match 3 game. The fish will sometimes give you hints on what you need to purchase. You can’t unlock the next tank until you’ve decorated the current one to bronze. If you’re a perfectionist, try to go for the gold on all three.

This game is addictive and beautiful. I give it 8 out of 10; a nice distraction for when you’re bored.

When Tom’s parents send him to his grandpa Joe’s farm, he thought it would be backbreaking labor with no computer to play on. Little did he know that Joe’s farm is in debt and it’s up to both you and Tom to save him.

The plot of this is quite simple. The town wants to build a mall and they’re using Joe’s farm as a space for their parking lot. You’d think it was one of those small towns don’t want big city malls destroying their pleasant atmosphere despite how it would help the economy plots. Instead, the town settles on a compromise that they get to later in the game.

The game play is your basic buy decorations for the farm. In order to get the money, you need to take part in a match 3 game. Sometimes, citizens will write letters to you or call you for special orders. During the game, you can read newspaper articles in order to further explore the story.

This game is addictive and beautiful. I give it 7 out of 10; typical Gardenscapes game with a twist.

You just joined high school and you have two paths you can take.  Will you become good or evil in this high school showdown?

I didn’t finish the game because it erases your progress if you take a break from it.  As for the movie, I’ve already seen this one courtesy of my sister.  It was ok, but my sister thought it was better than Spiderman 2, something I did not agree with.  The game follows the plot of the movie with a few differences if it didn’t fit.

The game play is a combination of an RPG and Match 3.  You give your character stats, battle to gain experience points and increase your level.  You can also do random battles and take on side quests.  During battles, you match different pictures to gain skills, whip your opponent, or gain your opponent’s loyalty.

This is the best out of the three, which is not saying much.  I give this game 5 out of 10, the only one where the makers used effort.

Overall, the entire bundle has some good points and some bad.  I give it 3 out of 10; I have no idea what possessed me to buy this game.

The evil Smokestack has opened his own chain of coffee shops, all with horrible and over priced coffee. To stop him, you must bring good coffee back to the world.

The whole plot sounds like a cheesy Saturday morning cartoon show and that’s exactly what it is. The characters try to stop Smokestack while he just strokes his beard and gloats. Personally, I don’t think you’re supposed to take the plot seriously. So, I’ll be forgiving of this for that reason. Also, Smokestacks is an overpriced coffee shop with bad coffee, sound familiar?

The game play is a mixture between match 3 and time management. Not only do you have to match three objects together, you have to serve each customer their order before time runs out. After the level, you can purchase all sorts of upgrades for your shop. Of course, in this game, not only do you have a set goal each level, you also have an expert goal to reach and a super goal. The higher goal you get, the more coins you have to purchase upgrades.

The plot’s cheesy (as it’s meant to be), but the game itself is addictive. I give this game 5 out of 10.