Archive for the tag “marvel”

Hala’s wreaking havoc all across the galaxy and only the Guardians can stop her.  There’s only one issue, the Guardians broke up.  Can Starlord get the gang back together and stop Hala?

Any true Guardians fan knows that the answer to the last question is yes.  I’m sure you also remember the death that broke the Guardians up in the last episode. Turns out that the writers didn’t go through with it, but I think that we can all figure that out.  I’m not going to give much away but I will tell you that two of the Guardians are miserable.  After all they’ve been through; I can’t really blame them.  This time, they’re actually upset about events in their life that matter.  The final Guardian, Groot, gets his time to shine in a flashback about how the Guardians met. 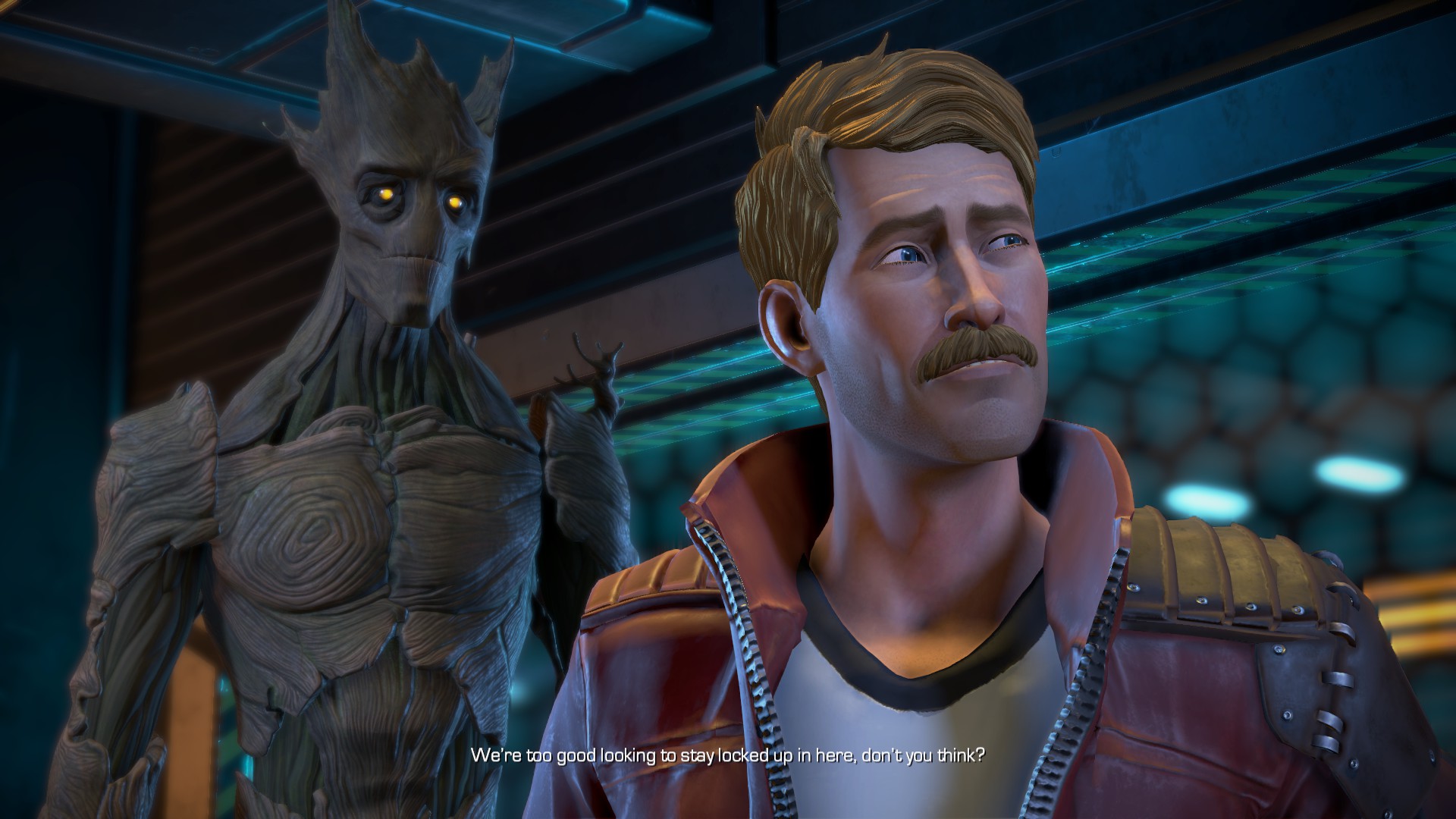 It’s similar to the movie with a few humorous moments that makes it the Guardians of the Galaxy.  That’s what I love about this franchise; the writers know how to blend the perfect amount of darkness and light that makes Guardians of the Galaxy shine.  It’s something Batman Forever failed at miserably.  You also get a scene where you can listen to Starlord’s awesome music.

The game play is typical of any Telltales game, with you picking dialogue choices for Starlord and, at one point, Groot.  During action scenes, you have to press the right key at the right time.  Let me tell you, those scenes really sneak up on you. At one point, you get to assign a task to each Guardian during the final mission to take out Hala.

Rocket came up with the plan, so you can bet that one of these tasks is useless but still funny.  There’s another scene where Mantis takes you inside Peter’s head and you can determine Peter’s thoughts and relationships with the other guardians.  It’s fun and heartwarming at the same time.  When you’re finished, you can compare your choices to those other players made and get a sneak preview of what’s to come in season 2.

This game is addictive and amusing.  I give it 8 out of 10, a brilliant finale for Guardians of the Galaxy Season 1.

Guardians of the Galaxy Episode 3: More Than A Feeling (Steam Store)

When the Guardians rescue an eccentric alien name Mantis, she claims to hold the key to the Eternity Forge’s power.

Now Starlord’s left with one decision, destroy the Eternity Forge or unlock its full power.  Either way, the fate of the universe rests in his hands.

I have to admit, my original impression of the game was that each episode would be about someone each of the Guardians lost in their past.  It would also give a reason for why each one of them wants to use The Forge.  Instead, only two of the Guardians want to use the Forge while the other two think Starlord should destroy it.  If you want to know who wants what, remember Drax’s reason for going after Thanos.  Then remember Rocket’s origin story from Episode 2, the one that sent me spiraling into depression.  After that, use the process of elimination to figure out which two Guardians want to destroy The Forge.  If you feel that I’ve turned a complex plot from a fun and yet serious super-hero story into a boring math problem, you couldn’t be more right.

Each episode delves into the past of one of the Guardians.  In this one, it’s Gamora’s turn.  Unlike the last episode, this one doesn’t insist on taking a break from the plot at large to delve into a Guardian’s back-story.  During the game, it’s clear that Gamora and her sister, Nebula, have issues.  Considering that they’re both the adopted daughters of an evil overlord who turned them against each other as part of their assassin training, it’s not hard to believe.

Now we get to see what drove Gamora and Nebula apart.  In the interest of not giving anything away, I’m just going to tell you that it’s a very deadly Three’s Company plot.  Whether they make up or not is in your hands.

The game play is typical of Telltale with you picking the dialogue options for the characters you play. 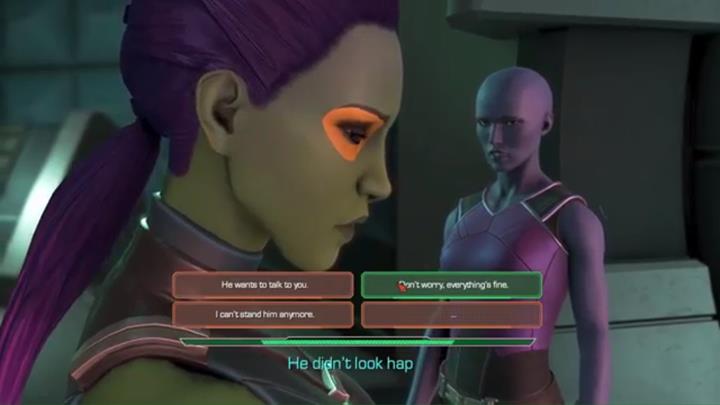 There are times when you will have to participate in QuickTime events that require you to press the right button at the right time.  Like many other Telltale games, they sneak up on you.

In the previous episodes, you had the option of checking your codex and mail and you can do so in this one as well.  If you chose to give Thanos’s body to NovaCorp, let me tell you that Rocket’s right, they are d*cks.  In the last episode, they refuse to stand down and let you handle Nebula.  These so-called cops won’t even listen to you when you claim that it’s to save the galaxy.  In fact, they won’t even give you the bounty and proclaim you the enemies of the galaxy.  It makes you want to replay the game and give Thanos to the Collector.

Some choices will affect the game play and, as I said earlier, there is one choice that will set the stage for future episodes.  At the end of the episode, you have the choice to either use the Eternity Forge or destroy it. 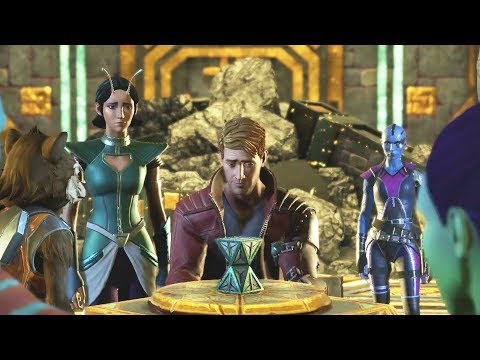 I’m sure many people who’ve lost a loved one can sympathize with Drax and Rocket when they vote to use the relic.  However, consider that the relic can only bring someone back from the dead if someone else takes their place.  Also, remember that Hala wants to resurrect the entire Kree race and she will murder whoever stands in her way to accomplish this.  Would you take away someone else’s life and risk ruthless people using this power for evil just to get the people you lost back?  Trust me when I say that it’s the most difficult decision you’ll ever have to make in the game.  No matter what you do, this decision will test the bonds of the Guardians of the Galaxy.

This game is addictive and intriguing.  I give it 9 out of 10, the perfect combination of light and dark elements. 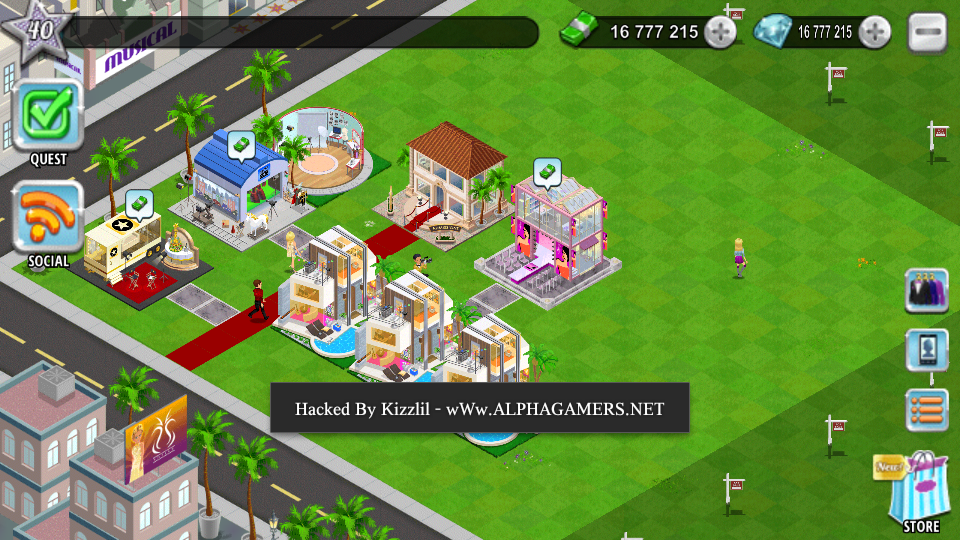