Archive for the tag “king’s landing”

This is the final chapter for the Forrester family.  One of the older brothers died in a campaign to free Ironrath from the Whitehill Occupation; forcing the living brother to pick up the pieces.  Gared’s found the North Grove, but he’ll have to work extra hard to gain the trust of the inhabitants.  Meanwhile, Mira’s scheduled for execution in King’s Landing unless she marries an evil man.

The Ironrath plot goes one of two ways depending on which brother you killed in the last episode.  As Rodrick, your goal is to negotiate with the Whitehills to prevent war and save your brother, Ryon.  If Asher survives, he must take Rodrick’s place as Lord of Ironrath and convince the Whitehills that the war is not over.  Since Asher survived in my play through, I’ll be reviewing that one.

First, I should tell you the terms of Ramsay Snow’s deal.  In the last episode, Ramsay told you that the Boltons would stay out of the Whitehill and Forrester conflict.  They will resolve this through war and the last house standing wins.  Personally, I feel that Roose Bolton would side with the Forresters.  No, I don’t mean that he would do so out of the goodness of his heart.  Remember, the game points out that the Forresters are the better artisans and take care to chop down the trees they need.  The Whitehills, on the other hand, are not only shoddy artisans, but reckless in their endeavors to harvest Ironwood.  Roose Bolton may be evil, but he is also practical.

If Asher survives, Ludd Whitehill feels that his house is victorious.  However, Asher refuses to bow down to the Whitehills.  In this plot, you see a new side of responsibility in Asher as he tries to hold the reins after Rodrick’s death, refusing to let him die in vain.  You also see a hint of a romance between Asher and Gwyn, the reason for his exile to Meereen.

Yet, despite his exile, Asher still loves his family as they do in return.  Talia is someone you do not want to get on the bad side of.  She may be as refined as Sansa, but she shows a spirit similar to Arya.  Let me give you a little spoiler, if you choose to poison Ludd Whitehill at dinner, Talia volunteers to pour the wine.  Elissa isn’t shy herself because she’ll offer to drink from the glass first to save Asher when Ludd insists Asher take the first drink.  However, Gwyn’s character is still lacking in my mind.  I get that she needs to side with her family but if the Forresters submitted to the Whitehills, that would just make things worse.  Therefore, Asher has to fight with everything he has.

Another spoiler alert, Gared is the only character who will survive no matter what you do.  This is ironic, because he’s not a true Forrester.  He himself must gain the trust of the inhabitants of the North Grove.  As for who they are, let’s just say that Lord Forrester had a few lapses in honor.

However, Gared does face one important decision.  In the previous episodes, Cotter’s wounds are fatal.  It doesn’t matter if you tended to the wound, he will still die.  As Gared, you have to decide how you will end his suffering.

Mira’s plot in King’s Landing is rather strange because, to me, she always felt the least like a Forrester.  I get that Mira’s in King’s Landing because Elissa signed her up to be Margeary’s handmaiden.  She wanted her eldest daughter to learn to behave like a southern woman.  However, she’s never truly interacted with The Forrester family.  Yes, I get that would be a little difficult since she’s in a different location.  Asher also had the same issue but we get to see him interact with his family and show affection for them.  In the case of Mira, all we hear about how much she loves her family is through letters she gets and that her actions at King’s Landing do contribute to Ironrath in small ways.  I realize that the Forresters are supposed to be like the Starks, separated through tragedy but still trying to pick up the remains.  In the show, we see the Starks interact with each other before tragedy falls, giving us a sense of family and sorrow as they’re torn apart.  Since the situation in the game is different, it would’ve been nice to provide some flashbacks to show happy family times, making Mira a true Forrester in my eyes.  However, considering what happens to her, I guess it doesn’t matter anymore.

As I said in the first paragraph, Mira has to choose between death and an abusive marriage.  Remember that Lord who helps you out in King’s Landing, Morgryn?  Well, spoiler alert, he’s evil and wants control of Ironrath through Mira.  Let me admit, I accidentally read a spoiler about Mira’s fate in the Game of Thrones Wiki and I knew she would live or die depending on my choice.  I’ve grown rather attached to Mira so, at first, I was going to choose marriage. 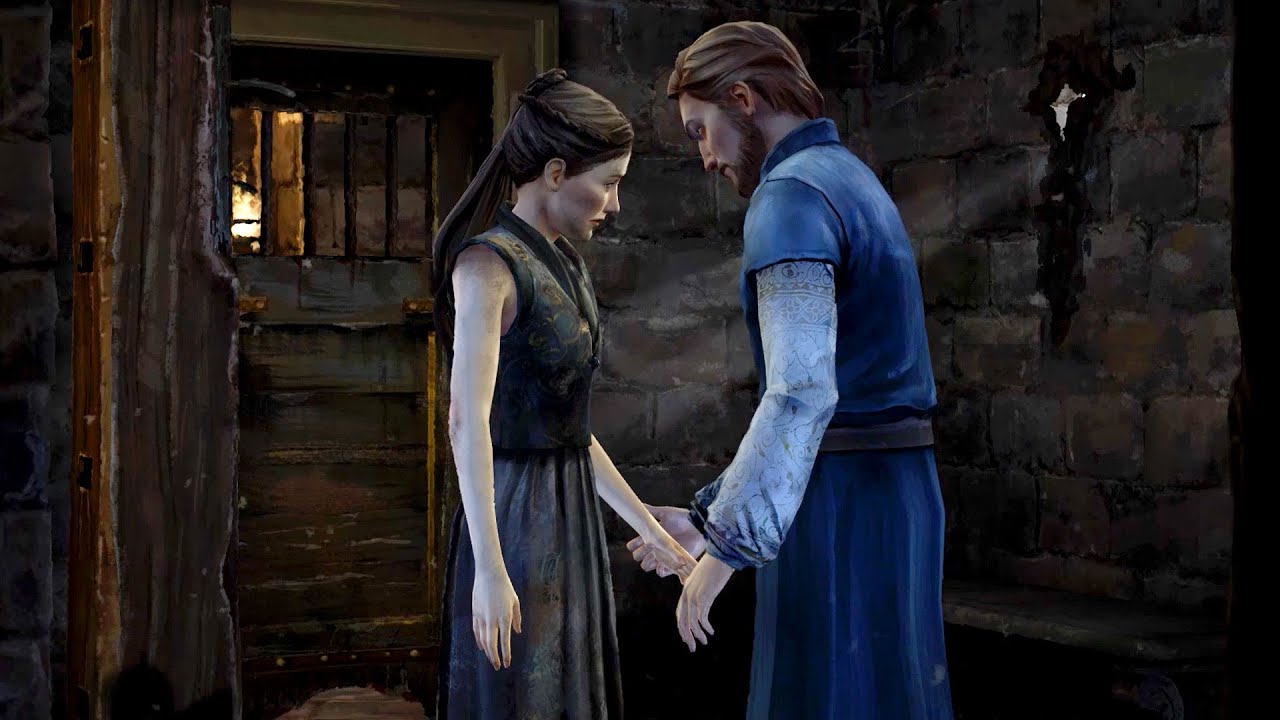 Then I decided to have her die rather than marry Morgryn and have Tom, the coal boy who helped her, die in her place. 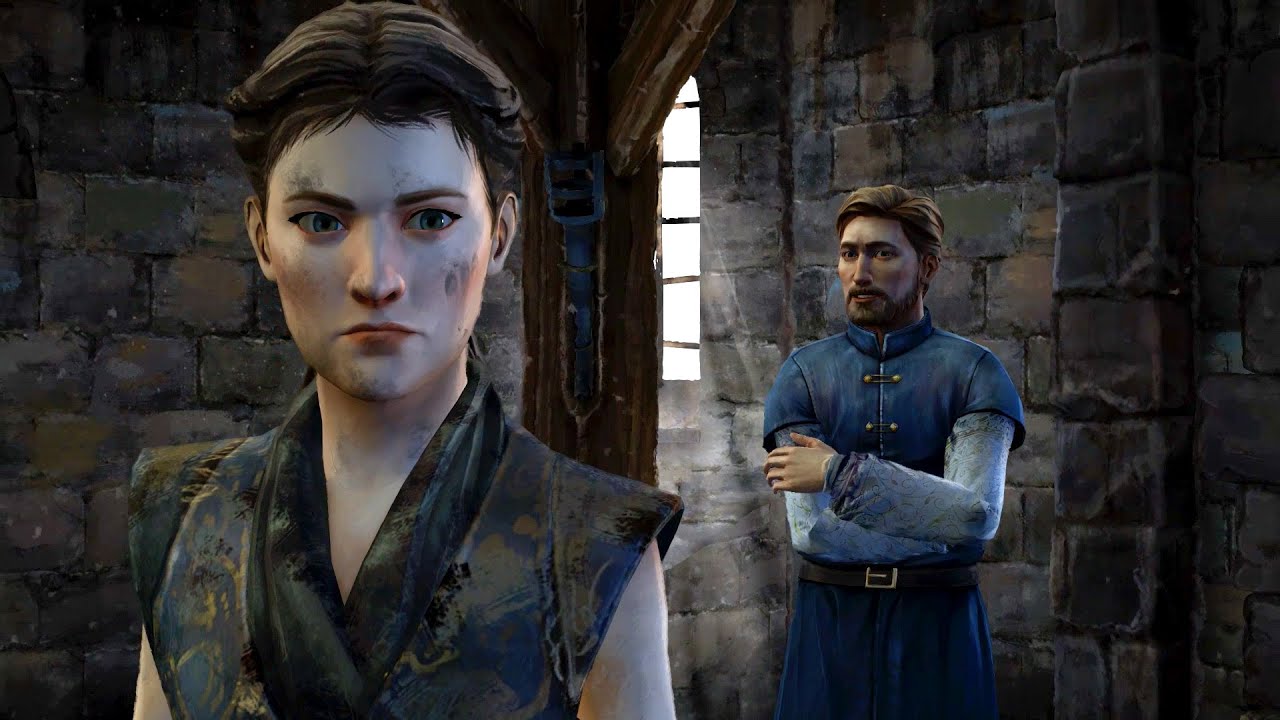 For those of you who don’t know, Telltale’s working on a second season and, considering this outcome, I don’t think we’ll be playing in King’s Landing anymore.  This means that the plot will have many unanswered questions, such as why Tom wanted to help Mira in the first place.  It’s what TV Tropes would call shoot the shaggy dog.  Then again, considering how things usually turn out in Game of Thrones, maybe it’s not that much of a shock.

The game play is typical of TellTale with you picking various dialogue options for the characters you play.

Some choices will have a huge impact on the story and, this time, I actually mean it.  During fighting scenes, you have to press the right key at the right time in order to live.  At the end of the game, you can compare your choices with that of other players.

This game is depressing and yet addictive.  I give it 7 out of 10, had me a bit shaken up but I didn’t like the King’s Landing story.

Game of Thrones Episode 5: A Nest of Vipers

Things are finally ending for the Forrester family as Asher returns to Ironrath with an army.  Meanwhile, Mira found the Whitehill’s contact in King’s Landing and Gared gets closer and closer to finding the North Grove.  Can Rodrick still manage Ironrath with all this craziness and a traitor?

I’m going to give a slight spoiler for those of you who haven’t played the game.  There is a traitor among the Forresters and it all depends on who you picked to be your Sentinel in the first episode.  That’s right; the guy who doesn’t get the job throws a tantrum and collaborates with the Whitehills.  This just makes me believe that neither one of them can be trusted if they turn on you the minute they don’t get their way.  I will give some credit to the writer’s for Talia’s character, since she shows some real moxie in this episode.  She tells you about the traitor and recommends killing him.  However, if you choose to have Rodrick comfort Eleana in this episode, Talia walks in on the two of you having sex.  I have to say, Talia took it pretty well for a highborn girl from a medieval setting.  However, she’s not quite as adept with handling Ramsay, not that I blame her.  That’s right, Ramsay Snow makes his final appearance in the game and it’s definitely a memorable one.  He makes his first appearance at the end of Episode 4 and stays for the beginning of Episode 5 to tell you the good news.  You read that right; the terror of the north with no regard for life whatsoever is the one delivering good news.  Ramsay is still as terrifying as ever to deal with, but I’m still happy to see him due to having mixed feelings about his character.  I am both afraid of and attracted to Ramsay Snow.

Asher’s plot is my favorite, partly due to Daenarys and partly because you get to fight in the pits.

Spoiler alert, Daenarys will not give you any of her Second Sons, but she will give you gold so you can hire your own sellswords.  She also offers to have Malcolm work for her, claiming that an alliance with House Targaryen will be beneficial to both families.  I said in an earlier review that Asher reminds me of Han Solo and it still shows.  Some of the speech options show his own sense of humor and I do like Asher’s dialogue with Beshka.  You can also win over the slaves in the fighting pits by either sticking to their rules or showing them a new way.

Since not much happens in Gared’s or Mira’s plots, I’ll have to combine their stories into one paragraph.  Gared is still trying to find the North Grove, but he’s come across a slight detour with Cotter and his sister.  I’ll admit, I did enjoy hearing Cotter’s back-story and learning that the Free Folk can be every bit as prejudice as the rest of the Game of Thrones world.  As for Mira’s story, she’s lost every contact in King’s Landing and things don’t look well for her.  This poor girl can’t catch a break.  However, I did like her conversation with Tyrion at the end.

The game play is typical of Telltales, with you picking various dialogue options.

You also get to participate in QuickTime events, my favorite being the fighting pits, as I said earlier.  As Gared, you also have the opportunity to hunt rabbits.  Some choices you make have a huge influence on the story because this is the first episode where you get to decide who lives and who dies.  At the end of the episode, you can compare your choices with other players.

This game is addictive and intriguing.  I give it 7 out of 10, some of the storylines felt a bit weak.