Archive for the tag “final destination”

Life is Strange Episode 2: Out of Time (Steam Store)

Spoiler alert, which I try to avoid, but it’s difficult not to talk about some video games without mentioning them.  First, I’m going to talk about Kate, the religious friend of Max’s who found herself on a viral video.  I’m going to tell you what I’m sure you’ve already figured out if you played the game.  Kate when to a party and Nathan drugged her.  As a result, she unintentionally starred in a sex video and has no memory of what happened.  People hassle Kate for it with Victoria in the lead and her mother and aunt disowned her. 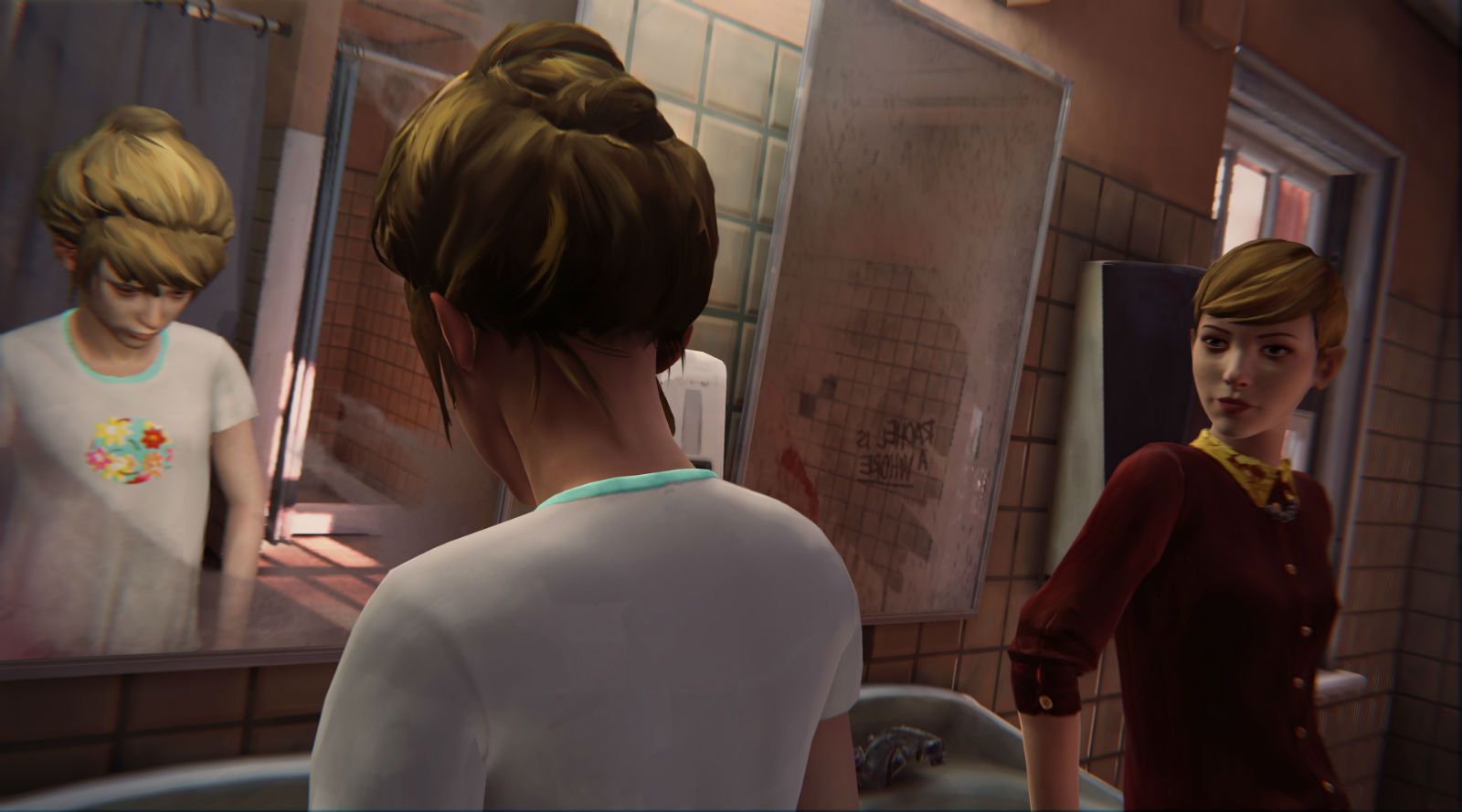 According to them, Kate’s disgraced the name of God by starring in that video and, either they don’t believe that Nathan drugged her, or they feel that it’s her fault.  First off, I would think that people that raised Kate would know that she would not do something like this voluntarily.  Another thing is that, as tragic as the situation is, I’m glad that they chose Kate to give it to rather than Victoria.  I’ve seen rape used too poorly in many fictional franchises where the victim is usually a provocatively dressed party girl.  What many people fail to get is that rape is about power and ugly people can fall victim to it.  By having this happen to Kate, who preaches about abstinence and wears conservative clothes, you demonstrate that this can happen to anyone.  Doesn’t matter how pretty you are, how modestly you dress and how much you preach about God.  Anyone can be a victim and it is not your fault.  Kate’s storyline also shows how evil Victoria is and yet the game shows hints that she’s not pure evil.  Yes, she does spread Kate’s viral video around, bullies Max and even films something at the end that I won’t give away because I have to keep some mystery.  However, Victoria is there for her friend, Taylor, in her time of need and, at the end, even feels remorse over her actions.  Don’t get me wrong, this doesn’t redeem Victoria but it makes her a more complex character.  Nathan, on the other hand, seems closer to pure evil but the game hints at a troubled family background in the first episode.  I applaud that they’re not using this to excuse him and it doesn’t look like he’s getting a love redeems plot.  That’s something that happens quite often in these types of stories.

Now, I’m going to talk about Chloe.  Right now, I don’t know what to feel about her.  I do like that she’s not pure evil as society would portray most female characters like her.  Chloe can also be rather tough and I can sympathize with her situation.  In the last episode, we learn that Chloe has an abusive step-father her mother married after her real father died.  This episode does give the step-father depth but it doesn’t excuse him beating up Chloe and harassing Kate.  Chloe dreams of leaving Arcadia Bay and making it out on her own in the big city.  However, some of her actions are very questionable, such as attempting to exploit two insane people who could kill her if she so much as makes the wrong move.  One of them, Nathan, actually did in the first episode.  Chloe also encourages Max to use her powers as much as possible, which causes Max’s nose to bleed and for her to pass out.  If that’s not enough, Chloe plays with guns and lays on train tracks, the latter nearly getting her killed. 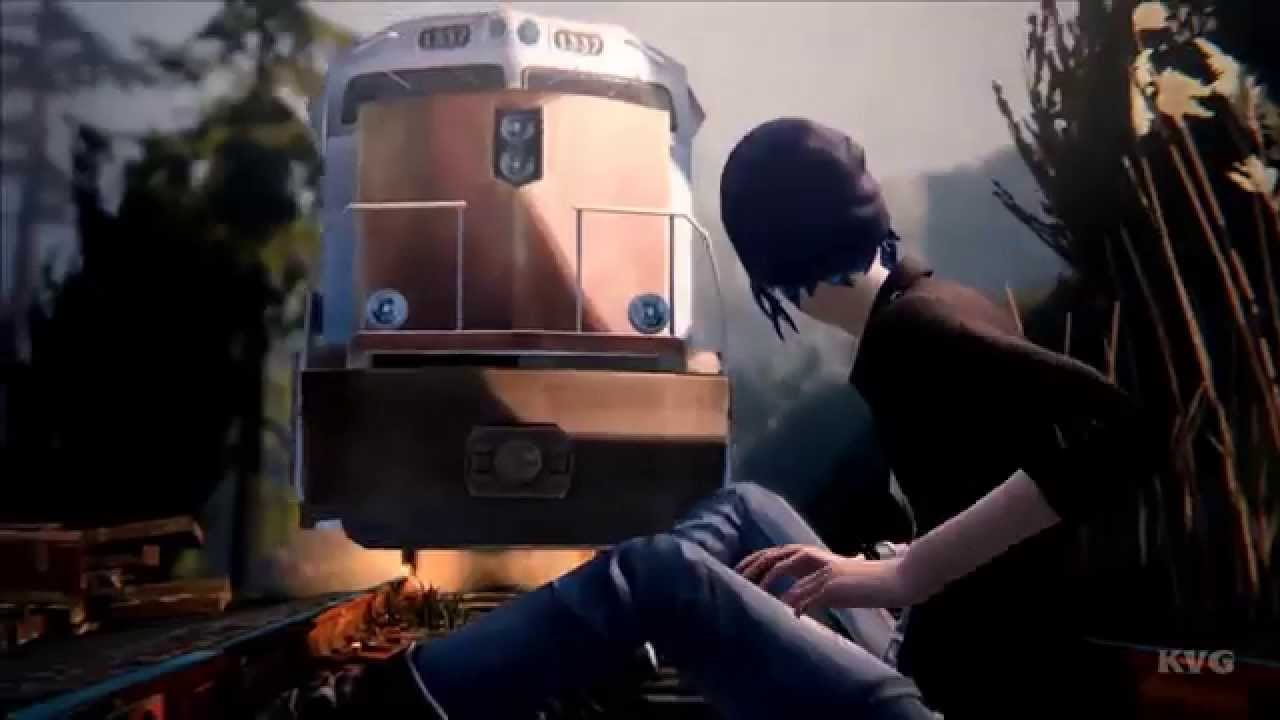 When you save her in a destructive way, Chloe does thank you but asked if you could’ve found a less destructive way to do it.  I don’t know if this is a Final Destination Paradox, meaning that Chloe’s fate is to die, or if she’s just too dumb to live.

The game play is similar to TellTale with no QuickTime events.  You pick dialogue but you don’t have to pick it right away.  You explore different areas, talk to people, examine various items and take pictures.  If you discover certain information about people, you can rewind time and use it to get closer to them.  You can also rewind time if you don’t like the choices you made.  Sometimes, the game play is rather frustrating on the PC if you can’t line the camera right.  Other times, the mouse refuses to cooperate with you.  You have no idea how many times I had to rewind time until I could get my mouse to cooperate. 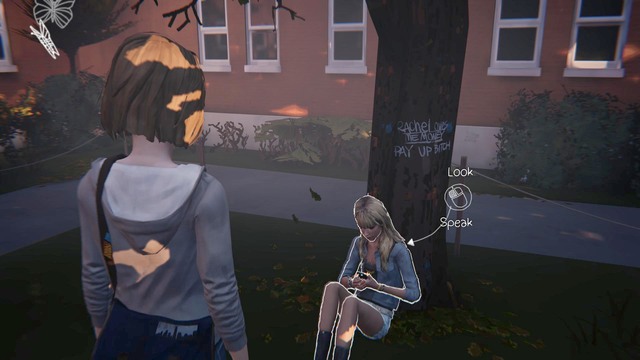 As you play, Max will automatically fill her diary with character profiles and her version of what happened in the story.  You will also receive text messages from various characters that Max will automatically answer if you press the right button.  There will be a point where you get a text message from Chloe during Jefferson’s class and, if you try to look at it, he’ll scold you.  I mentioned a scene that’s very tragic.  However, you can prevent that tragedy if you say the right things.  You won’t be able to rewind time in that scene, so be very careful.  It’s frustrating but, I have to admit, I’m glad that they’re giving Max limits with her powers.  It makes her more human.

This game is tragic and yet addictive.  I give it 9 out of 10, it gave me a bit of an emotional reaction but not strong enough to get the full ten.