Archive for the tag “blog”

Emily’s gone through serious changes.  Not only is she the star of her own cooking blog, but she’s also pregnant with a new little brother or sister for Paige.  Can she find a way to manage her blog and her pregnancy?

With a summary like that, you’d think the game would be more about Emily’s blog.  Unfortunately, it’s all about the pregnancy.  How Emily has so much to do with her restaurant, preparing for the baby and keeping house.  Apparently, Patrick fails at this due to one comment about how he fails at doing laundry in a washing machine.  People, it’s the 2010s; these jokes about how men can’t keep house and how women have to do everything are seriously outdated.  I should warn you that I’m about to discuss spoilers, so proceed with caution.  Patrick does give up his man cave to make a baby room and sell his motorcycle to buy an expensive crib.  Let me explain that, in one venue, Emily works at a baby store making cupcakes and coffee.  This same baby store has two expensive cribs that no one’s buying.  To me, it makes sense because you don’t really need to spend a ton of money on a crib.  Babies don’t care where they sleep as long as it’s sturdy.  My mom told me that I slept in a second hand crib and I didn’t throw a fit over it.  Well, Emily wants them for her baby whom she thinks is going to be a girl.  The owners can’t get rid of the cribs, so they have a contest to give one of the cribs as a prize to lucky number 500.  Francois and Angela win, so they end up giving the crib for a baby girl to Emily at the baby shower.  Then the baby turns out to be a boy so, as I said earlier, Patrick buys the crib as a gift.  Actually, Emily’s having twins and the monitor couldn’t detect them.  Allison claims that this can happen, although it’s rare.  If you ask me, this is just a contrivance in order to shock the player.  They go so far as to drag this out by putting Emily in the hospital due to false labor pains and the doctors won’t discharge her because Allison’s busy in the Emergency Room.  Therefore, Emily has to deal with Dr. Bozo, a man that tries to make her laugh whether she likes it or not.  Emily’s having a stressful time and doesn’t want to deal with any of this, but everyone else just tells her to give Dr. Bozo a chance.

There are some good points in the storyline, such as a daycare teacher not knowing how to handle kids.  You also have a laugh out loud moment when, after Emily agonizes about what to do for her Mother’s Day special, she accidentally gives birth live on her blog.  Thankfully, her viewers love it but that might be a bit of wish fulfillment.  I don’t know about you but, if I saw someone giving birth on their video blog, I’d have the same reaction Chandler and Monica had when the former popped in a video tape about a woman giving birth mistaking it for porn.  Another good point is that Emily’s grandpa Vito is in this game and dealing with his own terminal illness.  He dies in the end in a scene that choked me up.

I’ll admit there’s one part of the game that I feel neutral about at best.  In one venue, Emily visits a yoga studio and talks with the owner who’s expecting her own baby.  Apparently, she didn’t give her husband a say and he leaves her.  I think she was a little pushy, but it still doesn’t justify her husband abandoning her and the baby.  Don’t worry; she meets another love interest from her past in another contrived coincidence.

The game play is typical of Delicious with you delivering items to customers either at the table or at the register.  Then you check them out and, in the case of seated customers, you clean the table after they leave.  I’ll admit that, considering the summary mentioned Emily having a blog, I thought the level would be more of a computer type setup similar to Fabulous Angela’s Sweet Revenge.  Instead, you have the traditional map setup and you navigate through it like any other game with special challenge levels for more diamonds.  You can also play the daily challenge to earn more diamonds and you spend them on baby supplies.  You have to spend diamonds to purchase all three variations of the same product, which seems like a waste to me. 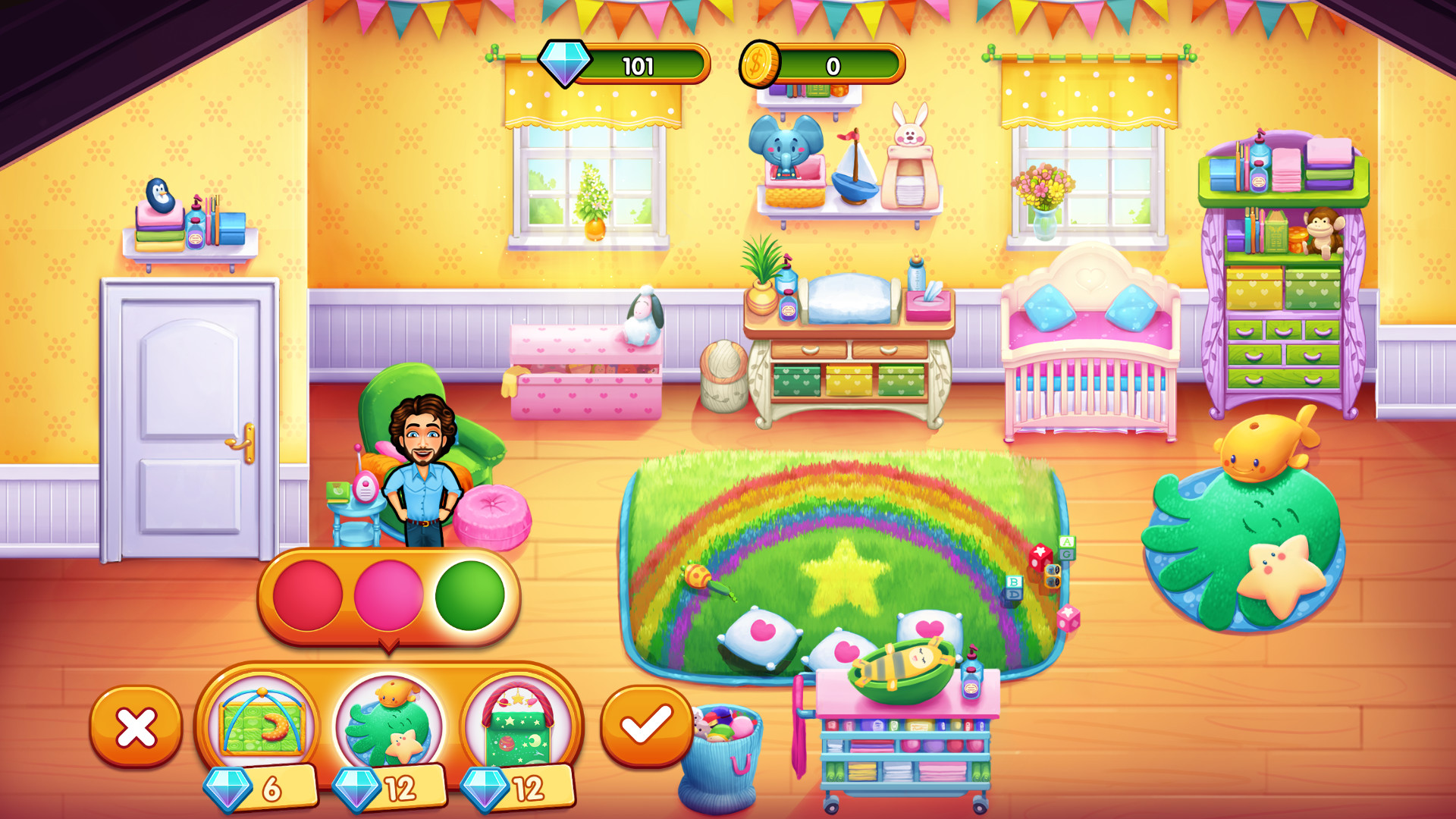 You don’t always play as Emily throughout the game due to all of the venues being different.  However, you do get to play as Angela in the last venue where she prepares food.  Sometimes I think the game forgets that Angela is a seamstress.  You could’ve had this be Mary’s level from Mary Le Chef and hire her for catering.  Angela could prepare baby clothes as Emily prepared cupcakes at the baby store.  Each venue also comes with mini games that you can successfully complete for more points.

You can also catch the mouse in each level and earn diamonds in some levels for story events.  Like the previous games, you can win up to three stars and, in this game, you can win up to three diamonds in the challenge levels.  The daily levels reset every 24 hours and you can earn up to six diamonds from those.  You can also win postcards if you meet certain conditions that you can customize and share on Facebook.

This game is contrived and mediocre at best.  I give it 5 out of 10, not awful, just disappointing.

That’s right, back from the dead and I’ve got big plans for this blog.  As many of you already know, I review video games from Final Fantasy to Diner Dash. This time, I plan on reviewing dollmakers as well because, whether you think they’re art or not, they are video games in the loosest sense of the word. I’m also expanding my repertoire to board games and, like before, you can even request reviews.

This time, it won’t be just a review site. I’ll post anything related to video games or board games in even the loosest definition of the term. Who knows? I might post pictures of my time playing video games and board games with my friends. Maybe I’ll write fanfiction based off of them, such as narrating the Mice and Mystics game from the point of view of Prince Colin, the character I usually play as. I’ll even post what I create from dollmakers because, as I said before, they are video games.

The best part is, not only can you request video games and board games for me to review. You can also submit your own stuff to me to post on my blog. It can be anything from art, to fanfics and even your Let’s Plays of video games. Just don’t submit any reviews, because that’s my job.

Gaby was just a little known celebrity blogger until an anonymous source texts her tips on finding the biggest Hollywood scoop. Can she make her blog popular enough to win the competition and interview Erik Von Hunk?

That’s right; I’m reviewing a video game about a blog on my blog. The storyline is about the lives of celebrities and some of them are parodies of real life ones. The lives they lead go from marriages to plastic surgery and all the way to sleazy affairs. I know, it’s not very deep but it is fun.

The game play is a unique take on the hidden object genre. The game separates each level into a blog post. You collect people and some of them will give you information. After you’ve gathered everyone you need, you get to complete a mini-game and read the post Gabby makes at the end. During the game, you can collect items in order for you to purchase different designs for the blog.

This game is simplistic yet addictive. I give it 8 out of 10; a fun take on celebrity life.