Archive for the category “board games” 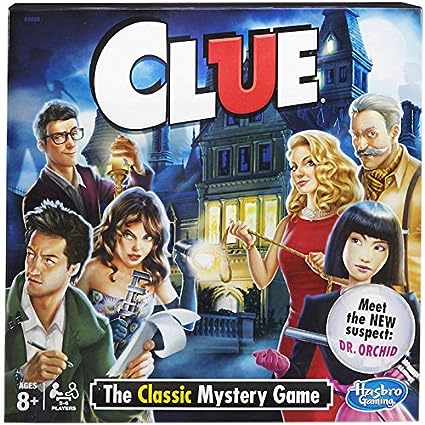 Someone murdered Mr. Boddy and it’s up to you to figure out whom.  Play as one of six suspects, each connected to the victim, and figure out who done it.

The plot is the standard murder mystery that makes the game popular in the first place.  The characters themselves are the standard tropes you would find in a classic mystery movie.  Miss Scarlet is the beautiful femme fatale. Colonel Mustard is the decorated war hero. Mrs. Peacock is the widowed socialite.  Mr. Green is the corrupt business, or con man in this version. Professor Plum is the classic scholarly gentleman. The only difference, besides a change in Mr. Green’s profession, is replacing Mrs. White with the new character, Dr. Orchid.  She’s the adopted child of Mr. Boddy with a PhD in plant toxicology. Those of you who are familiar with Clue know that Mrs. White held the job of Mr. Boddy’s housekeeper. I don’t know why this change happened, but I suspected they did so in order to have a career-oriented woman as part of the game.  An article I found on the Washington Post only slightly confirmed my suspicion. Apparently, feminists ran a petition for the makers of Clue to change Mrs. White’s job to being a doctor or a scientist. In response, the makers decide to remove Mrs. White from the game entirely and replace her with Dr. Orchid.  They also made this new character Asian so not all of the characters will be white. Only problem is that the makers enforced an Asian stereotype, which might just be an accident. I’m giving them the benefit of the doubt on this one. Other people are a little upset about their decision to replace Mrs. White with Dr. Orchid because they don’t like change, my mom being one of them.  In all reality, I wouldn’t have known about this had my mom not bought the game from Wal-Mart. We thought we had the original Clue but we might have given the game away in a daily purge by accident. Therefore, my mom had to purchase this new version.

The characters aren’t the only part of the game that changed.  In the classic game, you play a character, roll the dice, go to a room, and guess who did it with what weapon in that very room.  If your friends have one of the cards you mention, then you know that you’re wrong. Then, if you’re sure, you can accuse someone with a specific weapon and in what room the suspect killed Mr. Boddy.  If you get it right, you win. If not, you’re out of the game. You have to separate the cards into three piles, suspect, weapon and location. Therefore, the solution changes with each game. The rules say that you can accuse any time, but my mom and I have this one house rule.  You can only accuse on your next turn as long as you spend the next two turns exiting the room and then re-entering again. Well, in the new version, you also have nine clue cards that you have to use if you roll a magnifying glass with the dice on your turn. If you roll two, you have to take two cards instead of one.  If you’d rather play the classic game, then the clue cards aren’t necessary. The game also added a new style for a two-player game. You have to take four of the cards and put each one in a different room. When you enter said room, you can reveal the card. It adds challenge to a two-player game, but the clue cards seem more distracting than actually being a part of the game.  However, that might be because I’m not a big fan of change.

This game is addictive and intriguing.  I give it 7 out of 10; still adjusting to the clue card change.

Posted in board games and tagged board game, board games, classic, clue, mystery, request | Leave a comment

There’s a werewolf on the loose and it could be anyone you know, even you.  Can you help find the werewolf and save your village?

The storyline is a condensed version of one of those Murder Mystery dinner parties and the game plays out like one.  You get a card, look at it, close your eyes, listen to the narrator from the free app and do whatever your role requires.  After that, you open your eyes and try to find the werewolf. If you are the werewolf or his minion, your job is to mislead the players.  Each character comes with his or her own action, with the exception of the villagers. They just sleep there and add to the pile, which is definitely not my favorite character to play.  There’s also a character called the Tanner, whose job is to commit suicide. When my Monday Night Board Game group plays this, we have to leave him out because no one knows how to play him right.  Trust me when I say that I’m one of those people who screwed up with I played him. I also hate getting the werewolf and minion cards because, believe it or not, I’m terrible at bluffing. Therefore, more often than not, I lose.  Other than that, this is one of my favorite board games and I get excited whenever my group plays it. Unlike Werewords, most of the cards have a role to play and the storyline makes much more sense.

This game is exciting and suspenseful.  I give it an 8 out of 10; perfect for any meet up or board game party night.

When The Mayor gets everyone together to play twenty questions, a werewolf secretly joins hoping to sabotage the game.  Only the seer knows the correct word, but can’t tell anyone for fear of the werewolf killing her. Can you get the word right and save your village from the werewolf?

Logically, this storyline makes no sense.  Why would a werewolf care about a game of twenty questions?  Does this particular game have a magical power that keeps the werewolf in chains until the game is over?  However, the appeal of this game does not lie in the storyline. You get a card with a specific role and then listen to a narrative with your eyes closed, waiting for your instructions. 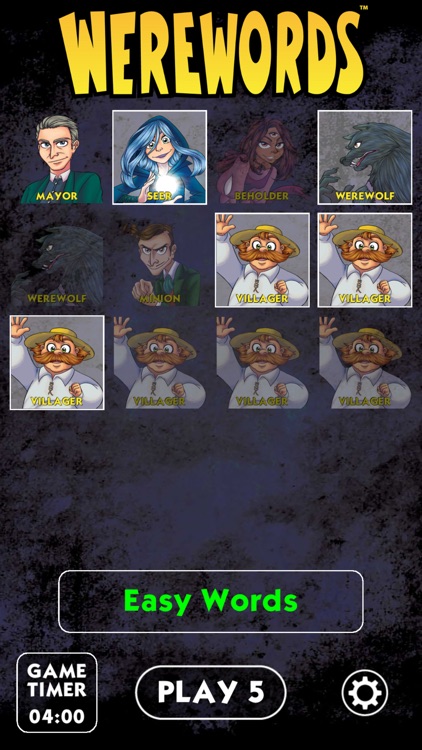 The only role you can be 100% sure of is The Mayor and this person also gets a second role you don’t know about. Other than that, the game is typical twenty questions with you asking or answering various yes or no questions that help you figure out the secret word.  The seer and the werewolves are the only ones who know, with the former trying to steer you in the right direction while the latter steers you in the wrong direction.

However, the mayor could also get the role of seer or werewolf, the latter completely ruining your chances of guessing the right word.  You can also set the game on easy, medium or ridiculous. Let me tell you, I recently discovered this game with my board game group and we only guess the right word half the time at best. That’s when we’re playing on easy, so you can bet that this is a difficult game. However, even if you don’t guess the right word, you can still win by figuring out who the werewolf is.  If you do get the right word, the werewolf still has a chance to win by guessing who the seer is. Since some people in my group, myself included, have a hard time directing people to the right word without giving ourselves away, we tend to lose just by the werewolf picking out the right seer.

This game is fun but, story wise, makes no sense.  I give it 7 out of 10; a fun little diversion and an interesting take on twenty questions.