It’s August and the Risian Event is almost ending.  While I’ll admit to not really getting what the culture is supposed to be, I’ll admit that it’s a beautiful planet and who doesn’t love a tropical rainforest?  Inspired by Hashakgig1106, I decided to participate in the events to purchase swimwear for each one of my STO characters!  Well, the ones I saw actually visiting Risa. For Candy, I went with a red skimpy bikini, the Khan necklace, sandals, a sunvisor that I tried to make look like Cyclops’s from X-Men and I even let her hair down and dyed it purple.  Candy is the star of my Deep Space Nine fanfic, Mind Games, and this is a reference to when she tags along to visit Risa.  I picked a red skimpy bikini because, due to Candy having a skinny type of figure, she can pull it off.  I also gave Candy a visor because she’s a total geek, so I can see her getting a visor that looks like the one Cyclops wears.  As for the purple hairdo, Candy went a little crazy on Risa and did something she’s contemplated for awhile.  The necklace is supposed to be like Candy’s quarter pendant in the fanfic that she never really takes off.  As for the sandals, she’s afraid of getting ringworm.  The look I envisioned also came with a sunhat but, unfortunately, sunhats were not available. For Melana, I went with a red one-shoulder with shield sunglasses.  I had to go with a one-piece for Melana because she has a curvy figure, so bikinis are out of the question.  The swimsuit was originally blue with a pink streak because I didn’t want to put everyone in red but, let’s face it, she looks good in red and was a mentor for Candy at one point.  So Candy somewhat copying her isn’t that hard to believe.  Plus, the bright colors clash and Melana is very fashion conscious.  As for the sunglasses, it’s just how I pictured her sunbathing on Risa. Siket was an interesting case, because I’ve only recently developed him outside of being Patel’s boyfriend who shows up later in Mind Games.  I saw Siket as being somewhat playful off-duty while being serious on-duty.  After all, I picture Siket being the one to make the moves on Patel when the Romulans join the war against the Federation.  So, I went with palm tree board shorts, a Gorn Aloha Shirt and a pair of large sunglasses.  I also darkened his skin a bit because I read somewhere that yellow goes better with medium tones. Defoli is the odd one out, because he doesn’t originate from Mind Games.  He came from The Fight To Survive, an original sci-fi story inspired by Deep Space Nine.  Defoli’s based off of Gul Dukat, but he can be as vain as Jeff from Community (if you haven’t seen that show, I pity you).  So, for his beachwear, I picked a simple pair of red shorts, a small pair of sunglasses and Khan’s necklace.

The only two characters of mine who don’t have swimwear are T’Mara and my Jem’Hadar character, but that’s because I couldn’t think of any reason why they would visit Risa.

So, did you take part in the Risian Event?  If so, what did you do on Risa?  Did you participate in events, purchase some swimwear, raise a tropical bird, or compete for the prize?  Do you have any pictures of your time on Risa?  Also, if you want to, let me know which of these characters’ beach look is your favorite. 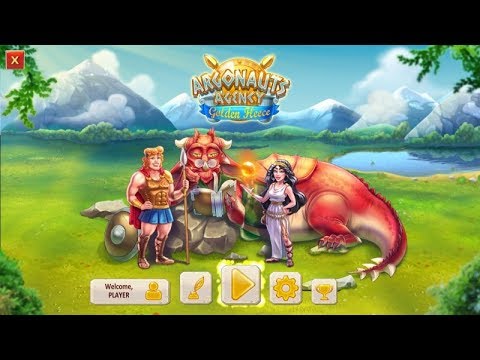 When Jason gets news about a legendary Golden Fleece, he assembles the Argonauts Agency to go find it.  Will Jason succeed where others failed?

This story is a fun re-telling of the Greek myth of Jason and the Golden Fleece, much like Disney’s Hercules.  I’ll admit that I enjoyed it and there is a reference where you have to rescue Medea in one level.  For those of you unaware of the original myth, Medea was Jason’s wife, who helped him complete the trials to earn the Golden Fleece.  Jason repays Medea by divorcing her in order to marry the princess of Greece.  Trust me when I say that it didn’t end well.  I’m hoping it ends better for them in this game.

Once again, I received the offer to beta test a game that’s about town building.  I just hope this doesn’t become the new norm.  In the game, you have to use workers to build bridges, factories and anything else that can help you achieve your goals for the level.  Jason just stands there until he has to defeat a Minotaur or collect a papyrus.  The Minotaur was actually Theseus’s deal but, in the Disney Hercules series, Hercules got himself involved in a whole ton of adventures that he never took part of in the original myths.  Unfortunately, the beta test comes with two bugs.  The first is when I couldn’t click on the Minotaur to advance through the level until I got a lucky break.  The second is when I beat level ten and the game wouldn’t let me continue.  I hope that Big Fish Games will fix these bugs when they release the full game.  Anyway, you have to earn one star in order to advance throughout the game.  The faster you complete each level, the more stars you earn with three being the maximum amount.

This game is fun, even with the bugs.  I think I might buy the full game when it comes out.