Ever since childhood, Maggie dreamed of writing her own movie.  Unfortunately, her job at Hollywood is being the assistant director to an insufferable man.  If that wasn’t enough, Maggie also has to deal with co-workers who will do whatever it takes to crush her.  Does Maggie have what it takes to make it in the cutthroat business of Hollywood?

This review might contain spoilers, so read with caution.  While the game does take place in the Delicious universe, it’s a little more ambitious than most games that you would find in the series.  For starters, this game discusses one theme common in Hollywood, sexism.  It starts with the female star of the move in the first venue, Catherine, complaining about how her character, Hester, is little more than a plot device to motivate the man.  When she brings this up to Frank, the star of the movie, and Clyde, the director, they both scoff at her.  Maggie is the only one to take Catherine seriously and bring this up to Clyde, pointing out that the target audience of the movie is women so the main woman has to be someone they can admire.  As much as I hate to say this, Maggie is only half-right.  While movies such as Jane Austen adaptations and Titanic feature strong female leads, movies like the Twilight Saga find themselves lacking in a similar department.  All three have, or had, a large female audience, but the former two still have large fan bases.  As for the last one, very few people talk about it anymore.

I said in the first movie that Maggie’s dream is to write her own movie.  When she finally gets the chance to meet the son of a famous producer, Al Jr., it’s not her script she pushes on him.  Her friend, Michael, is also an aspiring screenwriter and wants Maggie to help him make it big in Hollywood.  However, he shows no interest in reading her script.  In other words, Maggie also faces sexism in Hollywood and it doesn’t stop with Michael.  Al Jr. tells Maggie to look pretty in order to please the investors and some of them are more interested in dating her than they are in listening to her opinions. Even when Maggie tries to wow investors as herself and has it under control, Al Jr. still undermines her and puts her down when he can.  To make a bad situation worse, when Michael finally reads Maggie’s script, he admits that he fell asleep while reading the beginning.  He then proceeds to call her story a boring chick flick.  This is the final straw and inspires Maggie to break off into her own independent company.

I should tell you that Maggie’s movie is not one that I’d call a chick flick.  It’s a compelling story about the main character discovering that her father’s tied to the mafia and working with her friends to stop him.  However, society has a belief that stories starring men are gender neutral while stories starring women are exclusively for women.  It is a belief that started disappearing in the 90s era of television.  The proof is that shows such as Buffy the Vampire Slayer and Daria attracted a large male audience despite both shows starring women.  It’s even less prevalent in present time with The Hunger Games and Wonder Woman doing well in the box-office.  While the issue of sexism hasn’t disappeared entirely, this is a step in the right direction.

I’ll admit that this game is a huge improvement over Mary Le Chef.  However, the storyline does have one or two problems.  The star of the movie Maggie first works on, Frank, is rude, arrogant and sexist.  He demands special treatment, hates when Catherine’s character gets more screen time than he does and sexually harassed a member of the staff.  It gets so bad that Maggie fires him and gives more screen time to Catherine to finish the movie.  When Maggie starts her own company and needs an actor to play her main male character, Frank comes through for her and his personality does a complete 180.  There is no build up to this whatsoever.  Like Mary Le Chef, this game also has unnecessary romantic subplots.  The first being Maggie’s romance with Michael that goes nowhere and ends when he reveals his own selfishness and sexism.  While this is a necessary subplot to make Maggie release her dream, there is no need for a romantic connection between her and Michael.  Maggie also has a love interest in the form of Ted who shows no value other than being her high school crush.  Ted shows more value in the extra footage that comes with the platinum edition.  However, he is little more than a device for conflict between Maggie and Jessica.  Catherine and Frank also get together, despite having no chemistry other than when they play characters romantically linked to each other in movies.  Also, despite this game taking place in the Delicious universe, don’t expect any cameos from the characters.

The game play is a vast improvement over Mary Le Chef.  While you’re still delivering items to the people that come in, you can also direct movie scenes in certain venues. 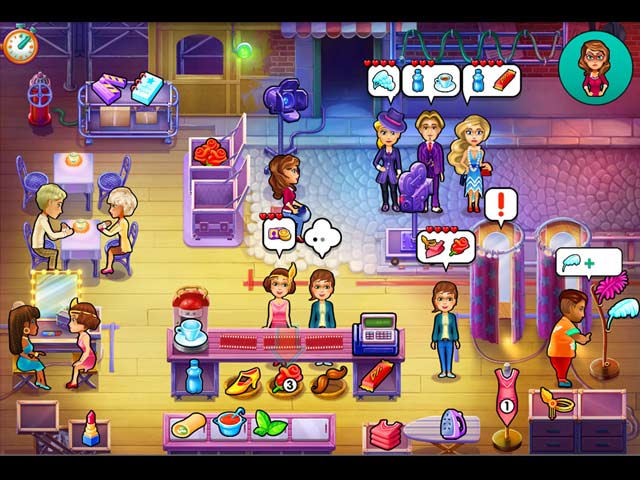 Sometimes, you have to shoot the same scene repeatedly, but it gives you a chance to fully read the dialogue and get an idea of what the movie is about plot wise.

You still have to clean tables and reload the stock, but the game rewards you for it by giving you extra points for each level.  That’s right; this game actually rewards OCD players such as me.  You also have to find the mouse in each level and complete an event in order to earn diamonds and purchase trophies.  You have to get the first star in order to advance through the game, but go for all three if you feel lucky.  Purchase upgrades in-between levels and use an item as often as possible in order to unlock all of the products.  You can also unlock achievements by completing various tasks in the game.

Unlike Mary Le Chef, Maggie’s Movies actually tells you how close you are to unlocking certain products and trophies.

This game is addictive and intriguing.  I give it 8 out of 10, a brilliant commentary on Hollywood sexism.