Fables The Wolf Among Us Episode 5: Cry Wolf (Steam Store)

Bigby’s finally solved the murder of Faith and Lilly.  Now he only has to bring the Crooked Man to justice.

The last episode ended on a cliffhanger with Bigby meeting the Crooked Man.  T 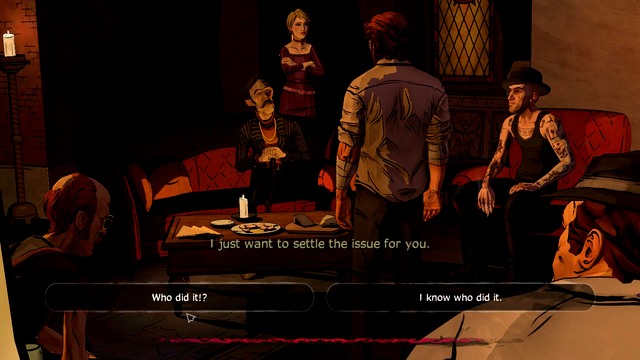 hose of you still interested in finding Faith and Lilly’s killer might be disappointed in the resolution.  Thankfully, the game is more about the huge conspiracy in Fabletown than it is about that.  Which, if you ask me, is a little more interesting.  As for who the killer is, it’s the one the fans most suspect.

Be warned, I have a few more spoilers to discuss.  One is about the social commentary on prostitutes at the end.  For starters, I should tell you that the one who killed those girls and the one who put their heads on Bigby’s porch are not the same person.  The latter is Nerissa, The Little Mermaid, and this is where the social commentary enters.  She talks about how the world considers prostitutes like her to be disposable.  If one of them dies, people won’t bat an eye.  It’s something Nerissa refuses to let happen to her friends, so she stuck their heads in front of Sheriff Bigby’s office to get his attention.  This is something that separates Wolf Among Us from other video games.  Don’t get me wrong, prostitutes are quite common in adult video games but this is the first time I’ve seen a prostitute treated as a person and not window dressing.  Let me explain that, more often than not, prostitutes are what the main character pays for on the side being little more than sexual fantasies.  In this game, the prostitutes may be victims but one manages to take an active role.  In the second episode, it’s Nerissa who leads Bigby to Crane by insisting he pretends to be a regular customer.  In this episode, if you bring the Crooked Man to trial, Nerissa will speak against him by pretending to be a witness. 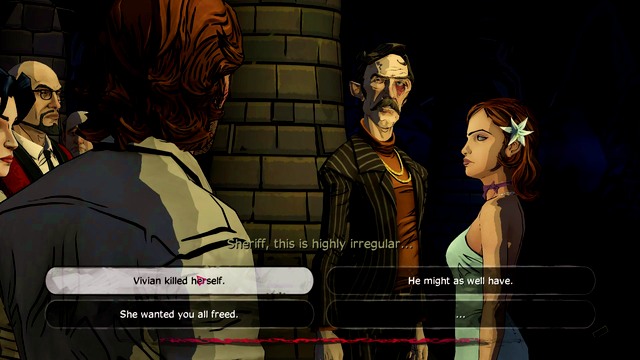 Truth be told, she wasn’t actually there but she didn’t expect the Crooked Man to remember her and she was right.  I’ll admit, Nerissa does dress a bit revealing when on the job and it is partly fanservice.  However, remember her profession.  When she’s finally free, Nerissa dresses casually. 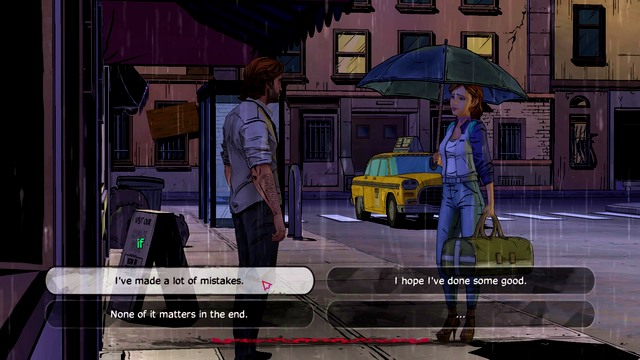 Personally, I don’t think putting a woman character in revealing attire is sexist.  It can be, if done poorly but, if you analyze each of your characters and you feel at least one of them would dress like that, you can pull it off.

The game play is typical of TellTale games.  You pick Bigby’s dialogue options, you have to make important choices and you have to press the right button for Quicktime events.  In this game, you get to fight Bloody Mary and it is awesome!

Yes, the original Bloody Mary from the urban legend.  She can walk through mirrors, make copies of herself and is a real match for Bigby, in his original wolf form.  That’s right, Bigby completely wolfed out!  You even get to see Bloody Mary in her original unglamoured form and it is terrifying!  This is a woman who kills the children playing Bloody Mary in front of a bathroom mirror for kicks.  Even the Magic Mirror is afraid of her, I am serious.

As for the Crooked Man, you can either bring him to face judgment or kill him. 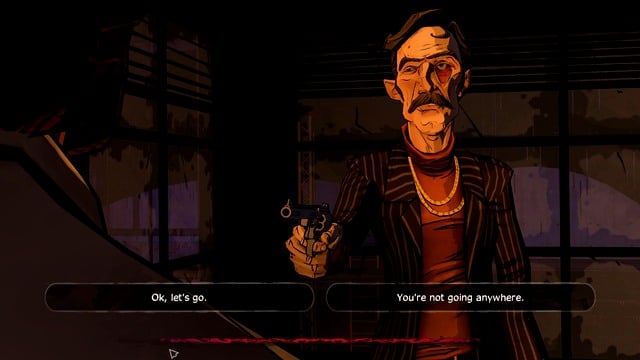 As the Crooked Man’s biggest supporter, he could have spoke on his behalf giving Bigby a true challenge rather than only convincing the people who hate him.  Speaking of copping out, I discussed Snow’s reasoning to have Toad and Colin sent to the Farm, which I did not approve of.  It doesn’t matter if you stick up for Colin or give Toad money, Snow still sends them there.  Then again, Toad could have been lying about Snow claiming the money didn’t matter.  This is a guy who complains about the cost of glamour and has a sports car parked in front of his home.  He probably screwed over himself and TJ, the one I really feel sorry for, and blew the money on expensive watches.

This game is intriguing and a little disappointing.  I give it 7 out of 10; good ending yet a few wasted opportunities.