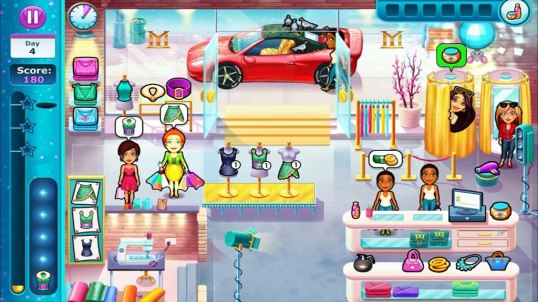 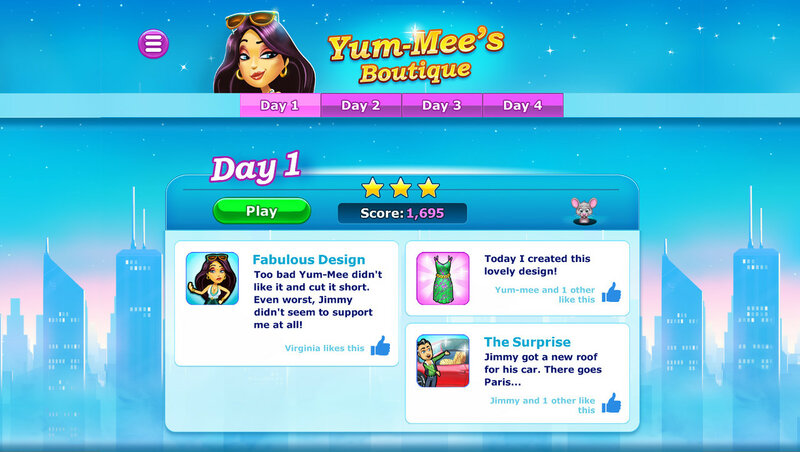 Maya’s dream has finally come true.  She has her own boutique and she’s ready to make her name in the world of fashion.  Can you help Maya balance her career and her personal life?

It’s hard to talk about the storyline because what the comics say changes depending on Maya’s stats.  They might focus more on Maya’s career, her personal life or both.  I’ll admit, I did like that aspect of the comics.

The game play is something else.  You take customers to whatever part of the shop they request, bring their orders to the sales clerk and then give them back to the customers.

My favorite part is at the end of the week, when you can pick actions for Maya that bring up her stats and help her balance her career with her life

This game is interesting but can get dull.  I give it 4 out of 10, unique but doesn’t really have much else to offer.

After Ramsay Snow murders Ethan Forrester and hands their livelihood over to their rival house, The Whitehills, the family struggles to maintain their once great house.  Fortunately, Rodrik returns to become the new Lord under dire circumstances.  Meanwhile, Mira Forrester secretly plots to overthrow the Whitehills while working as Lady Margeary’s handmaiden in King’s Landing and Asher, the exiled Forrester, is on his way home from Meereen with an army of sellswords.

I should warn you; this is the second episode of a TellTales game, so spoilers are unavoidable.  For instance, Rodrik supposedly died in Episode One and then came back in Episode Two, his death turning out to be an exaggeration.  Personally, I felt that was a cop out that they centered so much drama around Lord Forrester and Rodrik’s deaths, forcing Ethan to be the new lord.  Then they destroy all the drama surrounding it by revealing that Rodrik’s alive and he can take over as the New Lord.  I’ll admit, I actually liked Ethan and his struggles with having responsibility thrust on him at a young age.  This was why I wasn’t happy to see Ramsay kill him at the end.  I think it would have been more dramatic to keep Ryon dead and see how the Forresters truly struggle.

Mira Forrester’s scenes are some of my favorites, partly because they include Tyrion, who’s my favorite character in the show, other than Daenarys.

Don’t get me wrong, I actually like Mira, her struggles and how you can make her a total badass, if you so choose.  Though I think Tyrion might have been a little sloppy in his assistance.  Let me put it this way, this is the same man who told Lady Stark that, if he were to plot an assassination, he wouldn’t hand the assassin a dagger that could be easily traced back to him.  When Joffrey’s killers frame Tyrion for the murder, he points out that, if he were to murder Joffrey, he wouldn’t do so in a way that leaves him standing there holding the cup.  Tyrion also had to see who Cersei’s spy was on the council, so he deliberately told each member of his plan to betroth Myrcella to a different ward.  I think that, if Tyrion were to ally with Mira, he would do so in a way where his alliance would not expose her or himself.  For one thing, he approaches Mira while she’s with Sera, the other handmaiden, and not asking to speak to Mira in private.  Tyrion also failed to dismiss the Lannister guard before bringing Mira to the meeting.

Speaking of Sera she has a small part in this and it’s something I actually like.  She is a bastard and, while we see many male bastards in the show and learn how hard life is for them, we never learn what it’s like for females.  In the world of Game of Thrones, no matter how bad things get for men, women always have it worse.  Therefore, you can bet that life would be worse for a woman bastard, something I wish the show would explore and, I hope the game will take the chance to.  No matter how bad things get for men, they always have the Night’s Watch as an option.  I’ll admit, it’s not a great one but it’s better than nothing.  How would a woman bastard be able to cope in Westeros?  In the case of Sera, she needs to secure a marriage to a man of high rank in order to establish her security.

Gared joined the Night’s Watch and he hasn’t fared well.

I don’t know what the popular opinion about The Wall is, but my mom absolutely hates it.  She finds it dull with only a few matters of interest.  Personally, I like The Wall but that’s because I’m in love with Jon Snow, who gets to make an appearance in this game and advises Gared in life as a member of the Night’s Watch.

So far, nothing really happens except that Gared gets into a few fights and has trouble getting along with many of the other recruits.  Gared also talks to Jon Snow, the one redeeming feature about The Wall, about the Red Wedding.  They even discuss why Gared wants to be a ranger.

We heard about Asher in Episode One, but we never really get to meet him until now.  I’ll admit, I like Asher’s journey as well as his companion, Beshka.  You can tell that they’re both good friends who’ve seen each other through the good and the bad and are trying to survive in a harsh climate. 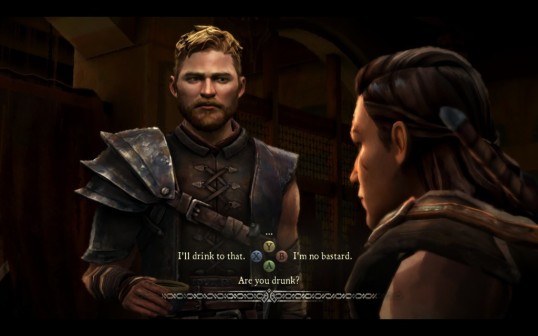 They both made a living as sellswords and have quite a few enemies to deal with.  I was happy when Malcolm comes to get them and tells Asher the plan to save House Forrester.  I already said their plan is to hire an army of sellswords to take back House Forrester, but what will they hire them with?  Sellswords cost money, which they don’t seem to have in abundance.  Maybe they plan to pay them with Ironwood, which is their livelihood, but you only get to keep half of it if you managed to convince Ramsay that the Forresters are the better craftsmen.  Even then, you give over another half as dowry to convince Elaena Glenmore to marry Rodrik.

I particularly loved how Episode Two ended.  Talia sings at the funeral for Ethan and Lord Forrester and the former’s last words influence the lyrics in her song.

I found this particularly moving not only because of the beautiful song, but also because of the shift of scenes to the other Forresters and Gared dealing with the aftermath of their own decisions and their own struggles to save their family, even if they don’t live at Ironrath anymore.  It’s enough to make you cry.

The game play is typical of TellTale games.  You make dialogue decisions for each character you play and the game compares the more important ones to what the other players decided.  I’m just going to say right now that your decisions don’t really matter.  For instance, there’s one scene where you have to choose whether Rodrik kisses Lord Whitehill’s ring out of respect in order to let his younger brother, Ryon, the Whitehills’ hostage on Ramsay’s orders, attend the funeral for his father and brother or refuse and allow Rodrik to keep his dignity.

No matter what choice you make, the outcome is inevitably the same.  So don’t kiss the ring and let Rodrik rule the house with his head held high.  You can also explore scenes with the character you play and collect items for your inventory, even if that doesn’t really accomplish anything.  There will be quick time events where you have to press the right button, so don’t drop your guard for even a second.  The Wall also has a game play event where you can demonstrate Gared’s skills in strength, swords and crossbows.  I’ll admit that I actually liked that part, even if shooting the crossbow is a little tricky due to the constant movement.

This game is intriguing yet doesn’t seem to explore its potential.  I give it 6 out of 10, a bit of a letdown but maybe it will get better.